If we consider Britain’s rich cultural and religious historical landscape, it is easy to see why the UK is home to such a diverse range of sacred buildings, monuments and spaces.  We’re still drawn back to ancient sites today, intrigued not only by the rituals and beliefs of the time, but also by the reason our ancestors chose these specific places to honour them.

Here’s a run-down of 5 of the most remarkable and interesting religious, spiritual and holy sites in Britain.

Of course, we couldn’t leave Stonehenge off the list.  Arguably the most famous sacred heritage site in the UK, this prehistoric henge in Wiltshire is a UNESCO World Heritage Site visited by 800,000 tourists a year.  It is believed that the construction of Stonehenge was carried out in phases with a circular earth bank and ditch built around 5,000 years ago, followed several hundred years later by around 80 bluestones being raised into place in a circular formation.  The third phase took place around 2000 BC and during this time sarsen sandstone slabs were arranged in an outer crescent.  Some were arranged in structures of three, in the centre of the site; the trilithons we now associate with Stonehenge.  The huge sandstones weighed up to 40 tons with the tallest measuring 24 feet and it is believed they were sourced 25 miles away.  The bluestones were smaller but were found to have originated over 200 miles away in Wales, leading scholars to wonder how prehistoric people transported these 4-ton boulders so far across the UK.

It’s likely that different groups or tribes of people contributed to the construction of Stonehenge, but its overall purpose is still shrouded in mystery.  There is archaeological evidence of the site having been used as a burial ground, but most historians and scholars believe there is more to it.  Perhaps it was used for ceremonies or as a destination for religious pilgrimage, maybe a site for our ancestors to commune with their ancestors.  In the 1960s, astronomer Gerald Hawkins suggested the placement of the stones correlated with astrological events such as solstices and eclipses.  Although this is still a contested point, many people nowadays make the trip to Stonehenge every year to celebrate the summer and winter solstices and reconnect with their spirituality. 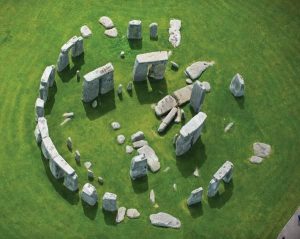 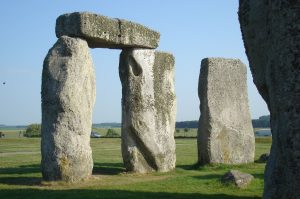 The city of Bath was built over hot springs which have likely existed for tens of thousands of years.  Prior to the Roman invasion of Britain, the Celts held the springs sacred believing them to be the work of the Celtic goddess Sul, associated with fertility, healing and medicine.  Celtic coins found at the site suggest offerings or a means of communication with the goddess.   When the Romans successfully invaded Britain in AD 43 they set about creating cities and convincing the natives to integrate themselves into the Roman Empire.  One way in which the Romans achieved this was through the adaptation and subsequent Romanisation of Celtic traditions and beliefs.  When they discovered the springs at Bath, they renamed the town Aquae Sulis and merged their goddess Minerva with the Celtic goddess Sulis.  Sulis Minerva was born!  A temple to Sulis Minerva was created at Aquae Sulis and became a focal point for worship; not only would people visit to enjoy the restorative qualities of the hot spring, but pilgrims would also visit to pay their respects to the goddess.   There was a courtyard surrounding the classical style temple with a great altar in front which was the focus of sacrifices, worship, rituals and ceremonies.  There was a cellar under the temple where the cult statue of the goddess was kept in a windowless room, illuminated only by the sacred fire that burnt before it.

The temple of Sulis Minerva was an important worship site until the late 4th century AD when Christianity was gaining pace and pagan traditions were increasingly marginalised.  When pagan temples were forced to close in AD 391, it fell into a state of disrepair and sadly collapsed.  Some remains of the temple courtyard are kept at the Roman Baths Museum. 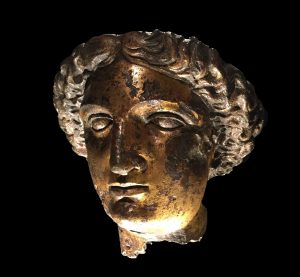 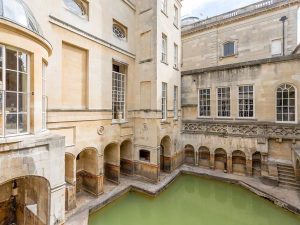 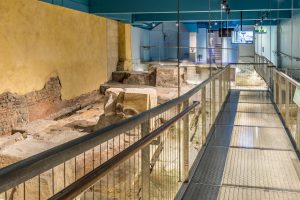 Known also as Holy Island, Lindisfarne is an island off the coast of Northumberland, only reachable across a causeway at low tide.  The island is first mentioned in the 6th century AD and was a focal point of Celtic Christianity after a monastery was founded by St Aidan in AD 634, with monks travelling from other communities to live there.   Cuthbert moved to Lindisfarne where he ran the monastery for a time and was revered as a spiritual guide and healer. When he later died on a nearby island, his body was returned to Lindisfarne and buried there.  As people visited his grave to pray, there were claims of healing miracles and so it was decided that 11 years after his death his remains would be exhumed so he could be declared a Saint.  The declaration of his sainthood was not only a day of celebration but a day of shock because when his coffin was opened, his body was complete and undecayed.  St Cuthbert became the most important and popular saint of Northern England and Lindisfarne cemented its role as a major pilgrimage site.

The priory at Lindisfarne was home to beautiful manuscripts believed to have been written in the 11 years after Cuthbert’s death, alongside treasures for religious ceremonies and other precious items when the vulnerable island found itself victim to a Viking raid in AD 793.  The monks living on the island were murdered and their relics and treasures stolen.  This raid was not only physically devastating but also psychologically, as pagans had attacked one of the country’s holiest shrines and St Cuthbert had not intervened.

A few decades later, the surviving Lindisfarne monks left the island, carrying St Cuthbert’s coffin and other treasures that had been spared for 7 years until they finally settled in Chester-Le-Street, Durham.  St Cuthbert’s remains were moved again in AD 995 and enshrined in Durham Cathedral where they remain to this day.

Durham monks briefly returned to the island in the 12th century, establishing a new priory in 1150 on the site where St Cuthbert’s shrine is said to have stood.  Even visiting today, you get a sense of the sacred importance of this beautiful island. 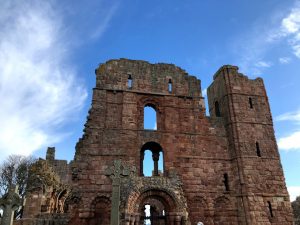 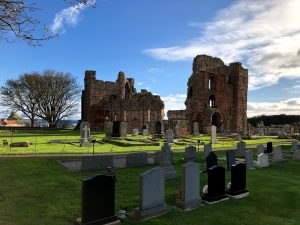 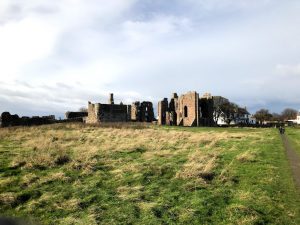 Considered the oldest henge monument in Britain, the Stones of Stenness on Orkney are the remains of a huge stone circle on an ancient ritual site.  Visiting today you can see four upright stones in a circle which would have originally contained 12 boulders, the tallest of which is 6 metres.  The stones are part of the Heart of Neolithic Orkney World Heritage Site and date back to 3100 BC.  The ditch around the Stones of Stenness is 2 metres deep with a diameter of 44 metres and due to it sitting lower than the water table, it would have constantly been filled with water.  There is speculation that this water was considered a gateway to the spirit world or that this ditch separated this ritual site from the outside world.

In the centre of the circle is a stone setting reminiscent of a prehistoric hearth, suggesting that something was burnt here possibly in sacrifice or ritual; bones of cattle, sheep and wolves, pottery and charcoal were found in the hearth.  We may never know exactly why these henges were constructed but it seems likely that they were sites of ceremony, ritual and perhaps burial with the stones seen as possessing magical properties, something which survives in folklore to this day.

A nearby stone known as the Odin Stone had a circular hole in it and was visited by local couples who would hold hands through the gap as they got engaged. 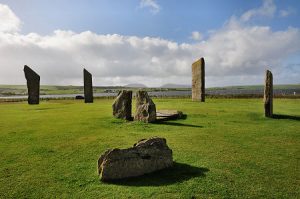 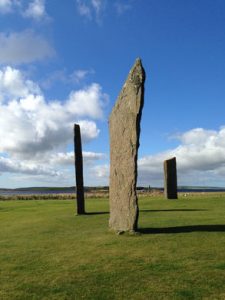 Creswell Crags is an enclosed limestone gorge on the Derbyshire/Nottinghamshire border containing several caves that were lived in during the last ice age approximately 40,000 years ago.  One of the caves, Church Hole contains the oldest verified cave art in the UK including depictions of animals amongst abstract and potentially religious symbols.  Since then, locals and visitors have passed through the gorge, leaving their marks carved into the rock.

In 2019, hundreds of symbols and marks were found carved into the walls and ceilings of the caves.  They ae believed to be Witches’ Marks or Apotropaic marks (from the Green apotrepein meaning ‘to turn away’).  These marks are often discovered at entry points of older houses and churches to protect those inside from evil spirits.  The collection at Creswell Crags is believed to be the largest collection of Apotropaic marks found anywhere in the UK.  Some of the marks found here allude to the Virgin Mary, likely in response to illness or other hardships.  In the past, people feared what they could not explain, and this included much of the natural world; it is possible that locals feared what might be lurking below the ground or in the twists and turns of the rugged natural landscape. The number of marks suggests either a significant place of protection or a place of fear, we may never know for sure. 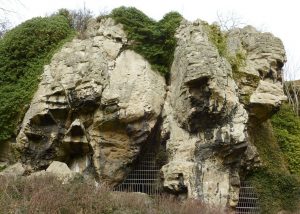 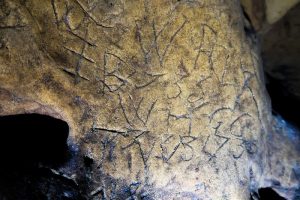