Gothic architecture emerged in France in the 12th century and was prevalent in much of Europe until the end of the 16th century. The Gothic style evolved from Romanesque architecture and exaggerated the features of its predecessor, increasing the scale of arches, windows and spires. Prior to the Gothic era, architects struggled to spread the weight of stone walls meaning that buildings and their towers were usually short and thin to prevent collapse. Throughout the 12th and 13th centuries advances in engineering enabled the construction of increasingly large buildings featuring cavernous internal spaces and almost impossibly tall spires as the structures reached towards the heavens.

The Basilica of St. Denis just north of Paris is considered to be the first Gothic building in the world and demonstrates the evolution from Romanesque architecture. In 1122 Abbot Suger, friend of French kings began to rebuild and enlarge the existing abbey, citing the building’s inability to deal with the large crowds of pilgrims who visited. He aimed to introduce more space and light. This was achieved with the use of flying buttresses and large stained-glass windows and through his work, Gothic architecture was born.

The Flying Buttress
A defining feature of Gothic architecture, a flying buttress consists of a half arch that projects from a building wall down into a pier, conveying to the ground the weight and horizontal force of a roof, vault or dome. The balancing forces allow the construction of grander, taller and more elaborate buildings. By diverting the weight of the roof away from the walls, the walls could be made thinner and more windows installed providing the buildings with an abundance of natural light. As well as serving a functional purpose, flying buttresses are also decorative in nature featuring ornate designs. 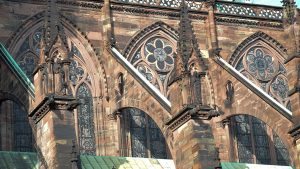 The Pointed Arch
When we think of Gothic architecture, the pointed arch is probably what first comes to mind. As with many of the features of this style, the pointed arch is as much functional as aesthetic. Its shape distributed the force of ceilings, transferring weight onto columns and other load bearing supports, freeing up the walls. The stronger arches allowed for vertical expansion, being built tall to reach up to the heavens, with their design emphasising the height of the building. 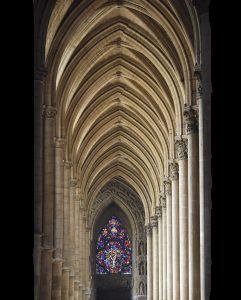 The Vaulted Ceiling
The ribbed vault was popular in Gothic architecture due to the reduced need for inner load-bearing walls, allowing the interior space to be opened up. Ribbed vaults are composed of a framework of crossed or diagonal arched ribs and they were added to the Romanesque barrel vault to increase the transfer of loads to the ground. Ribbed vaulted ceilings can cover vast spaces and provide visual symmetry. 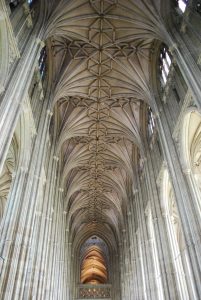 Tracery
Tracery involves the division of windows into sections of various sizes and shapes by stone frames or moulding. Tracery in the Gothic period increased the amount of glass panelling to allow more natural light and usually featured lancet or oculus patterns. A lancet window is narrow with a pointed arch whereas the oculus or rose is circular, almost like a wheel with radiating stone spokes. 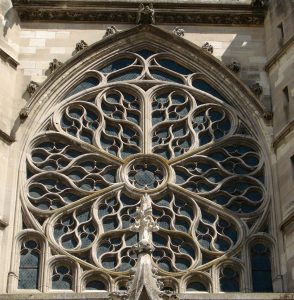 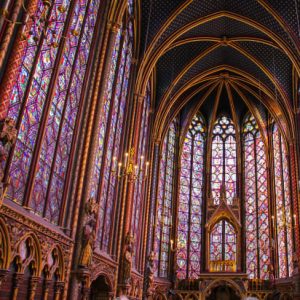 Ornate design
Gothic architecture was revolutionary in its incorporation of aesthetic values. No longer were buildings purely functional, they had architectural merit and beauty in their own right. As the appreciation for architectural beauty grew, more ambitious and ornate designs came to fruition. 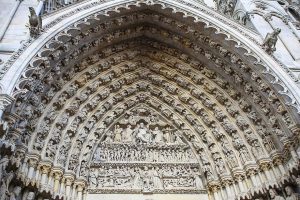 Chartres Cathedral is a UNESCO World Heritage Site, described as “the high point of French Gothic Art.” It is well preserved with the majority of the original stained-glass windows surviing intact and only minor changes having been carried out to the architecture since the early 13th century. 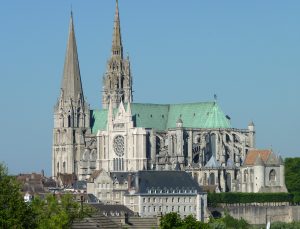 Cologne Cathedral is a dramatic example of Gothic architecture and was declared a UNESCO World Heritage Site in 1996.  It is the tallest twin-spired church in the world and Germany’s most visited landmark.

Westminster Abbey sits just west of the Palace of Westminster and is the traditional place of the coronation and burial of British monarchs. 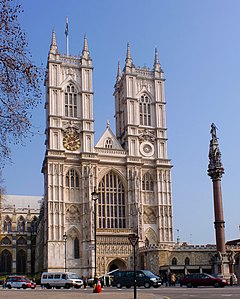 Considered to be one of the finest examples of French Gothic architecture in the world, Notre-Dame is one of the most widely recognised landmarks in Paris.  After a devastating fire in 2019, restoration of the cathedral is hoped to be completed by Spring 2024 in time for the Paris Summer Olympics. 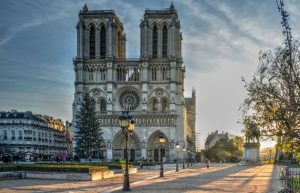 Canterbury Cathedral is one of the oldest and most famous Christian buildings in England and forms part of a World Heritage Site.

Although founded in 597, the cathedral was rebuilt in the 1070s and again in the 12th century following a fire. 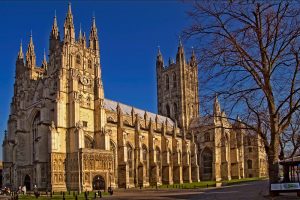 Completed in the early 16th century, Seville Cathedral is the fourth largest church in the world and the largest Gothic Church.  It was designated a UNESCO World Heritage Site in 1987. 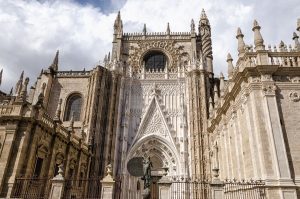