Since its formation in July 2018 the Heritage and Conservation Networking Group has gone from strength to strength, growing in numbers so much that in August, Quadriga opened a new office in Manchester to better facilitate the events!
We have also since opened a new office in Birmingham with the aim of expanding the group’s presence in the Midlands and offering more regular seminars and events.

In November we hosted two breakfast seminars and were joined by Crittall Windows in Birmingham on November 12th and DHW Joinery in Manchester on November 13th.

Crittall are the original steel window manufacturer founded in 1884 in Essex and are often specified for projects concerning historic buildings. You can see Crittall Windows on a number of notable buildings including The Houses of Parliament, Coventry Cathedral and Yale University in the USA.   Peter Davies of Crittall gave an in depth presentation on the history, development and use of the steel windows particularly in heritage restoration projects along with some impressive case studies.

The following day we were joined by Sharon Wright, Suzanne Whitham and Michael Cotler of David H Wright Joinery in Leeds, founded in 1989 and specialising in wooden windows and doors, particularly for heritage projects. The presentation covered the use of timber windows on heritage projects including understanding how to replace timber windows to specifications required by conservation officers. There was also a raffle where three lucky attendees won a gift from Hotel Chocolat – this definitely went down well!

As with all the seminars, they were free to attend and breakfast was provided and as always there was too much food (we’ll be giving everyone party bags of breakfast to take home next time!)

A huge thank you to the presenters and to everyone who attended. Our next events are the Christmas walks in Manchester and Birmingham which sold out in record time so apologies if you missed out on them.

We’re busy working on a calendar of seminars for next year so if you have any ideas or topics you would like to see covered, let us know by sending an email to laurab@quadrigaltd.com

If you would like to be kept updated and don’t already receive emails from us, please get in touch to ensure you don’t miss out on future events. You can also join the Heritage and Conservation Networking LinkedIn Group  by clicking here 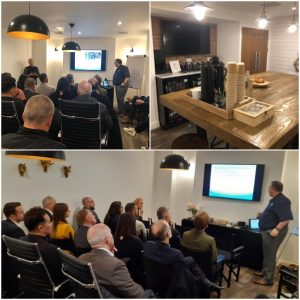